Create your own combination of Kaoss effects,
and simultaneously control up to four effects using a single fingertip!
Introducing the Kaoss Pad Quad; it’s Kaoss control evolved to a whole new level. 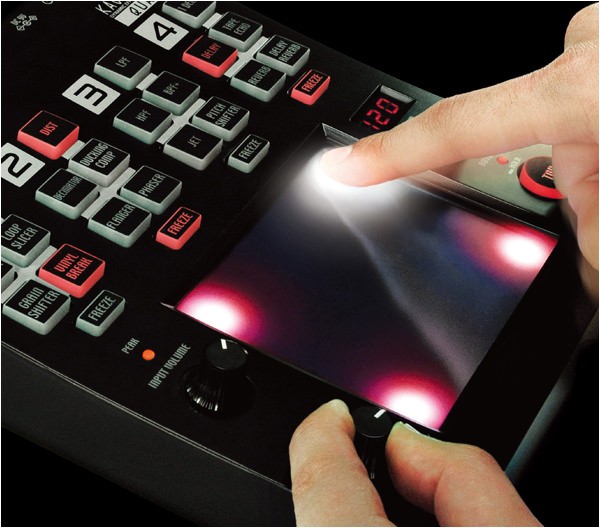 The intuitive interface that has helped to make the Korg’s Kaoss Series so popular is alive and well on the Kaoss Pad Quad. As you tap, slide, or move your finger across the X-Y touchpad, the effect parameters will change, producing dramatic realtime changes in the sound.
One big change to the touchpad is brilliant LEDs that light up in an intense variety of colors. The illumination changes depending on the state of the effects, the BPM setting, and on your movements while performing. The DJ booth or stage will be brilliantly illuminated, visually boosting the excitement level!

Use up to four effects simultaneously for unimaginable expression

As the name suggests, Kaoss Pad Quad lets you simultaneously control up to four effects from the touchpad. Each of the four effect categories – Looper; Modulation; Filter; and Delay/Reverb – contains five options (plus a null, or off position), for a total of 1,295 combinations! Best of all, effects can be chosen directly from the front panel, which means that you customize your effect needs on the fly. Enjoy trying your own Kaoss combinations and discovering ways to radically morph the sound.
By rhythmically adding successive effects, or switching effects on and off as your song progresses, you can use the Kaoss Pad Quad to add variation and development to the structure of your song. In other words, even a simple beat can be transformed into a lush musical statement.
Kaoss Pad Quad is extremely straightforward and easy to use, making it an enormous asset to the professional and great fun for the casual user alike. Just touch the pad to apply your chosen effects combinations. Connect a portable audio player or any audio source, and begin enjoying hours of sound creation and manipulation. 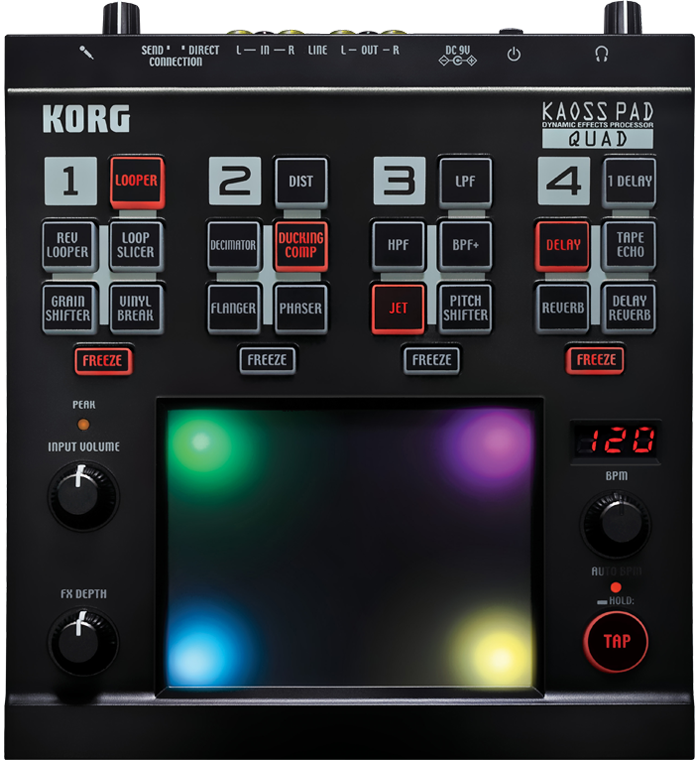 The proprietary Auto BPM engine automatically detects the tempo/BPM (Beats Per Minute) of the song that’s playing or the audio source.
Using this function allows BPM effects such as delay to remain in sync with the song. Tap Tempo is also provided; you can press the TAP button several times at the desired tempo to set the appropriate BPM value even for a song that does not have a strong rhythmic feel or whose BPM is difficult to detect. You can also use the BPM knob to make fine adjustments.