Be the first to review “Korg Volca Kick” Cancel reply 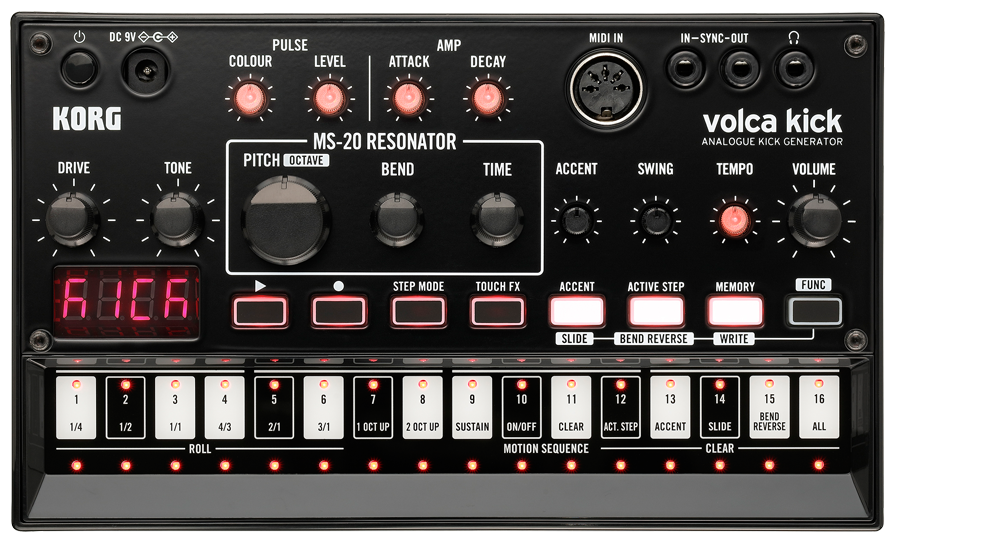 A powerful kick synthesizer that even covers kick bass

The volca kick generates powerfully present kick sounds using a completely analog circuit. To create those sounds, it uses not a typical sine wave, but the sound of an oscillating filter from the original MS-20. The powerful Rev.1 filter of the MS-20 self-oscillates when resonance is increased to the maximum, and this is used to produce powerful kick sounds with complex overtones.

Simple and effective parameters are provided, allowing you to freely design a wide range of kick sounds to your taste. Start the sound design process by using MS-20 RESONATOR (PITCH/BEND/TIME) to control the sense of pitch that generates the “body resonance” of the kick sound. Then use PULSE COLOUR/LEVEL to adjust the clip components to control the sense of attack, and AMP ATTACK/DECAY to intuitively control the decay of the sound. From tight kicks to fat, slow-decaying kicks, and pitched kick bass, it’s possible to create kick sounds that are appropriate for every type of dance music.

In addition to the analog kick generator circuit based on the MS-20 filter, there’s an analog drive that includes multiple stages of distortion. The distortion level and type can be varied by a single knob, increasing the variety and power of the kick sounds. You can use the tone control to transform the character of the sound by adjusting the high-frequency range.

The volca kick is not just a kick drum machine. You can use the 16-key touch-panel keyboard to perform dynamic kick bass, and take advantage of the volca kick’s powerful analog circuitry to generate the sub bass sound that’s indispensable to dance music styles such as grime or trap.

Since the volca kick covers a wide pitch range from low- to mid-frequencies, your sequences can include a variety of sounds including low tom, high tom, and sound effects. 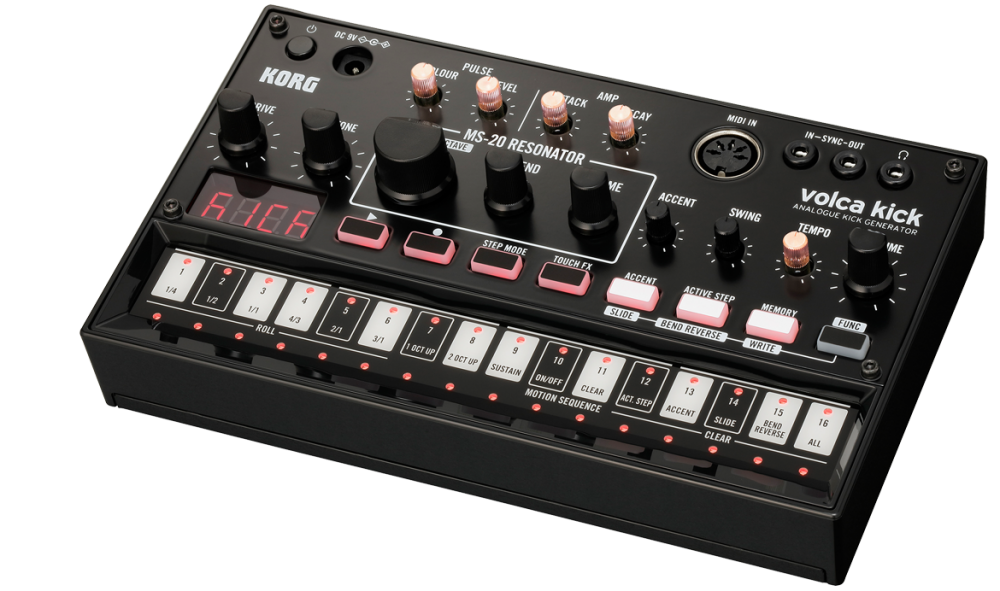 The volca kick features a 16-step sequencer that gives you plenty of improvisatory freedom. You can use it to quickly lay out a kick drum pattern, and it also supports realtime recording, which is an ideal way to perform kick bass phrases. And the pattern chain function lets you connect multiple sequence patterns for successive playback, making it possible to construct large-scale developments of 32, 64, or even 256 steps by joining up to 16 sequences.

The volca kick’s motion sequence function records your knob movements, letting you add time-varying change to the sound. This is great way to polish your loops, and also lets you generate highly original live performances. Up to 16 sequence patterns and sounds can be stored in internal memory.

Active step is a function that lets you skip a step during sequence playback. It can create effects similar to a short loop or unexpectedly irregular rhythms, allowing dynamic performances using the sequencer itself as a performance tool.

Use ACCENT, SLIDE, and BEND REVERSE to power-up your sequences

The volca kick lets you edit each step of the sequence in even more detail. The slightly unusual accent function lets you program accents per step (not per trigger) for groovy and sometimes glitchy sequences depending on how the ACCENT knob, which controls the depth of the added dynamics, has been set. The slide function creates the effect of a connection between steps, producing a smooth and distinctive kick bass. The bend reverse function can be specified for each step to play the bend backward, reversing the conventional kick pitch so that the pitch goes from low to high, and resulting in a unique sound. The volca kick lets you create unexpected and innovative sounds or sequences that transcend conventional kicks.

The new Touch FX function further strengthens the performance potential of the volca kick. You can instantly trigger a sequence effect simply by touching a step key, transforming your realtime performance in kaleidoscopic ways.

Sequence effects include the roll function that plays a sound repeatedly, the octave function that raises the pitch by one or two octaves, and the sustain function that immediately maximizes the amp decay. These are great ways to create punchy and powerful breaks.