When we call the wavetable oscillators “deep,” we are not kidding. Start with over 200 wavetables, each containing up to 64 waveforms—from thousands of individual waves. Use the 30+ Modifiers to change their basic character, and the 13 Morph Types to process them in real-time. Create new hybrids from any two wavetables using the unique, realtime A/B Blend. Quick math: that’s over 230 million wavetable variations out of the box, and that’s before you even add modulation.

No need to stop there, though! Expand your palette even more by importing new wavetables using the Editor/Librarian software. Try the many free and commercial wavetable libraries in the standard Serum format*, or create your own using the free, cross-platform WaveEdit , now available in a custom version for the modwave. Layer wavetables with samples from the built-in, multi-gigabyte PCM library, or import up to 4 GB of your own samples using Korg’s Sample Builder software.

* If an imported wavetable has more than 64 waveforms, it is assumed to be a generated crossfade, and some of the intermediate waveforms are dropped to create a 64-waveform version.

Even with all that synthesis power, playing up to four simultaneous wavetables per voice in a single Program, the modwave still achieves 32-voice polyphony, incredible for a wavetable synth. Layer two Programs together for double the possibilities.

Kaoss Physics models a ball rolling on a surface and/or bouncing off walls. Start the ball by flicking a finger on the x/y pad, or launch the ball automatically using a trigger source such as Gate + Damper. You can also directly control the ball by holding your finger on the pad. The position of the ball produces four modulation signals, which can be used to control any modulation destination you like: the X and Y locations, the distance from the center, and the angle relative to the X axis. This method of applying automated modulation is a first, and the results are modulations that are engrossing and evolving.

There is a bump in the virtual surface, going either down or up, like a valley or a hill. You can set the height or depth of the bump, and choose one of several different shapes for its slopes. The surface has adjustable friction, so that the ball slows down as it travels. There are walls on the four sides of the surface, and when the ball hits a wall, it bounces off. Walls can slow down the ball, as if they were padded, or accelerate the ball, like bumpers in a pinball machine. The walls can also be removed entirely, so that the surface wraps around to the opposite edges like a vintage arcade game.

Most parameters, including Tilt, Friction, Time, Bump Height and Position, etc. are modulatable. You can even modulate them from the Kaoss Physics outputs—for instance, try modulating Tilt X with Kaoss Y. The result is an interactive controller that amplifies your physical gestures, transforming them into complex musical results. Did we mention that it’s fun, too?

Motion Sequencing 2.0 is evolved from the wavestate’s Wave Sequencing 2.0. Timing, Pitch, Shape, and four sets of Step Sequence values are separated into “Lanes,” each with their own loop start and loop end, adding a deeper, more customizable level of phrase and modulation recording.

Every time the sequence moves forward, the individual Lanes are combined to create the output. For instance, a step sequence value may be matched with a different duration, pitch, and shape every time that it plays. You can modulate each Lane’s loop points separately for every note, using velocity, LFOs, envelopes, Mod Knobs, or other controllers. Each note in a chord can be playing something different!

Lanes can also randomize the step order every time they play. Finally, individual steps can be randomly skipped, with a modulatable probability from 0 to 100%. The result is organic, ever-changing sounds that respond to your control. The dual onboard arpeggiators can interact with Motion Sequences for even more possibilities. 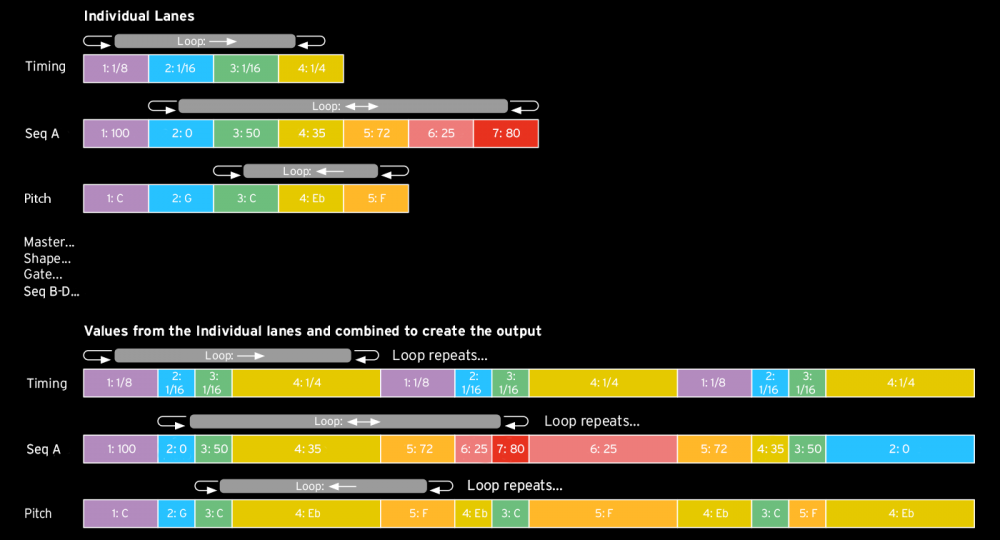 Deeper into the synth engine

Wavetables are sets of single-cycle digital waveforms, arranged in a specific order. The wavetable’s “position” determines which waveform is played. Moving the position with an envelope, LFO, or other modulation source creates subtle or dramatic changes in timbre. Some wavetable systems switch abruptly from one waveform to another; others crossfade smoothly between them. The modwave can do either one.

Use over 30 Modifiers to alter the character of any wavetable at load time. For instance, isolate the odd or even harmonics, add weight through anti-aliased quantization or saturation, or revisit the gritty character of old-school wavetable synths with the Vintage 8 & 12 options.

The 13 Morph Types let you stretch, squeeze, reflect, and otherwise alter the wavetables in real-time, changing their timbre and—when modulated—creating additional motion in the sound. Sync creates classic swept-sync timbres, using only a single oscillator. Three special Morph Types—FM, AM, and Ring Mod—modulate Osc 2 with Osc 1, and the last two even apply to samples.

Using the unique A/B mode, oscillators can blend any two wavetables with phase-synchronous precision—different from simply layering voices—opening up a dimension of intermediate waveforms. Add body to otherwise “thin” waveforms, for instance, or a touch of sizzle to a mellow timbre. Even fade between two different “modifier” versions of the same wavetable. A/B Blend can be modulated in real-time, of course.

Wavetables also sound great when layered with samples, and the modwave oscillators handle that with aplomb. Totaling in the gigabytes, the modwave’s sample library includes new material from KORG, Airwave, and Francis Preve, plus a bank from Plugin Guru and a selection from the Kronos and Krome libraries.

Add vintage character to your sounds with the aggressive MS-20 Lowpass or Highpass filters, or the strong, sweet Polysix Lowpass – all newly enhanced with gain controls to make it easier to dial in the resonance timbre. Shape and refine with a full collection of resonant 2-pole and 4-pole Lowpass, Highpass, Bandpass, and Band Reject filters. Or, step outside the box with KORG’s unique Multi Filter, which creates modulatable blends of multiple modes simultaneously – now with presets on a front panel knob, for easier exploration of its many possibilities.

Bursting with knobs and controllers, the modwave invites you to explore. Oscillators, filter, envelopes, LFOs, and effects are all at your fingertips with dedicated front-panel controls. Four programmable Mod Knobs are customized to bring out the most in every sound. Use the knobs in realtime performance, and also save the results as new sounds. The Hold button lets you sustain notes or chords indefinitely, while you explore the front-panel controls or play other gear.

Add in Kaoss Physics and the Pitch Bend and Modulation Wheels, and you’ll always have multiple dimensions of realtime expression.

Want to dig deeper? Almost all front-panel knobs, and most on-screen parameters, can be modulated. You can even modulate settings for individual Motion Sequence Steps! Mod Processors let you transform modulation signals using quantization, smoothing, curvature, and more.

An arsenal of effects

The modwave’s superb effects deliver production-ready sounds. Each Layer has three dedicated effects, plus a send to the Performance’s master reverb, followed by a master parametric EQ. Along with standards such as compressors, EQs, choruses, flangers, phasers, and stereo delays, you’ll find distinctive processors such as the Wave Shaper, Talking Modulator, Reverse Delay, Multiband Mod Delay, and Overb (from the OASYS and Kronos), plus modeled effects including VOX guitar amps, VOX wah, multi-head tape echo, and a collection of classic guitar pedals.

Looking for even more inspiration? A dedicated front-panel button, marked by a “dice” icon, generates new sounds via intelligent randomization. Randomize the entire sound or just a part of it, such as the oscillators, filter, or effects. Use the results directly, or as a jumping-off point for your own creations.

The modwave Editor/Librarian lets you edit and organize sounds via your macOS or Windows computer (including the latest Apple M1-based systems). Using USB networking for high-speed communication, it works like a second front panel for the instrument, so there’s no need to synchronize or transfer data. Animations show the effects of modulation in real-time – a great help when programming.

Set Lists offer effortless organization of your wavestate Performances, and deliver instant access at the gig or in rehearsal. Smooth Sound Transitions allow previously-played voices and effects to continue to ring out naturally, even once a new sound has been selected.

Balanced stereo outputs connect to any recording or monitoring system, and a stereo headphone output is provided for private playing or onstage cueing. Din-style MIDI jacks ensure connection to other MIDI-equipped instruments and audio gear, and the modwave supports class-compliant USB MIDI connections to Windows and macOS

Designed by KORG R&D in California.

KORG R&D created the wavestate and the original Wavestation, co-created the OASYS and Kronos, and has developed fundamental technologies behind many other KORG instruments. The modwave reflects their unique aesthetic, delivering stunning sound, deep flexibility, and immediate physical control via cutting-edge technologies. Key sound designers from the wavestate, Airwave and Peter “Ski” Schwartz, joined Francis Preve, Richard Devine, and the Korg voicing team to create the modwave’s incredible sound library.

The modwave comes with a diverse collection of music software to help you take your music to the next level, including Izotope’s Ozone Elements for AI-powered mastering, Skoove for improving your keyboard playing skills, and software synths from KORG and other brands.